Minutes of the meeting held on Friday 24th May 2019

Dernier café philo de l'année scolaire! Be there or be square! 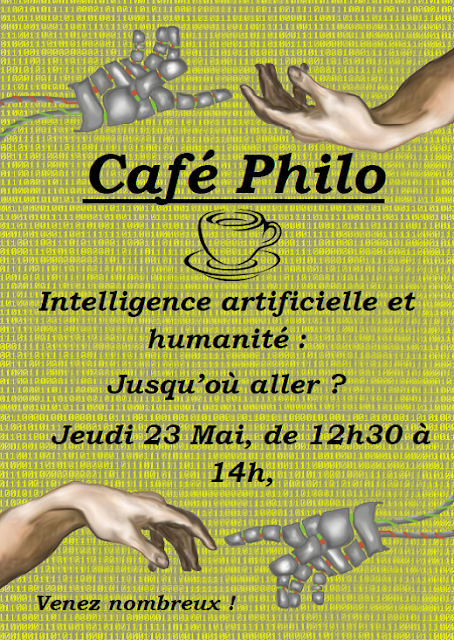 Minutes of the meeting held on Friday 10th May 2019

Read the January-March 2019 edition of the UNESCO COURIER! 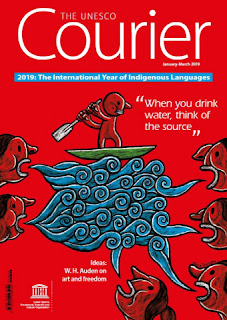 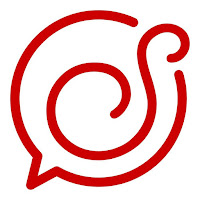 The Speak out! interschool public speaking competition (organized by the MUC 😄) went rather well... For the results (and a few photos), click HERE!
Publié par PN à 01:02 Aucun commentaire:

BRAVO everybody for the excellent organization of Friday's events! 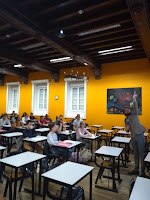 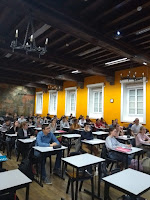 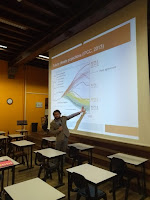 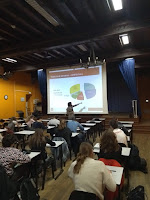 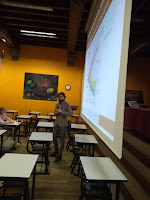 The fifty or so pupils in Seconde euro who attended the lecture felt concerned about the environmental issues Mr Pierre Nettleship raised; the lecture was very relevant; many thanks to him!

The video recording of the lecture will be available (with the PowerPoint) in the CDI soon.

Launch of the GREEN TEAM!

The Green Team committee (Victoria, Thiago, Garance, Loriane, Mme Puertas) launched the group. 11 pupils in Seconde Euro are keen to take part in the activities of the group, which is proof that the pupils want to get involved in collective climate action. Garance and Victoria will get in touch with them via Instagram to suggest a date for the first meeting. The first project will be to ask for recycling bins in every classroom.

Opening of the photo portraits exhibition

The food (thanks Thiago!) & drink was much appreciated. About 30 pupils took part in our game (they had to guess the jobs of the people in the portraits). If you would like to know more about the exhibition, there is an interview of the photographer on the website: ARTicle


The exhibition lasts until Friday 17th May. Be sure to play the game! Go the ACCUEIL for the piece of paper.

A burning issue. Article by Victoria (our co-president)... 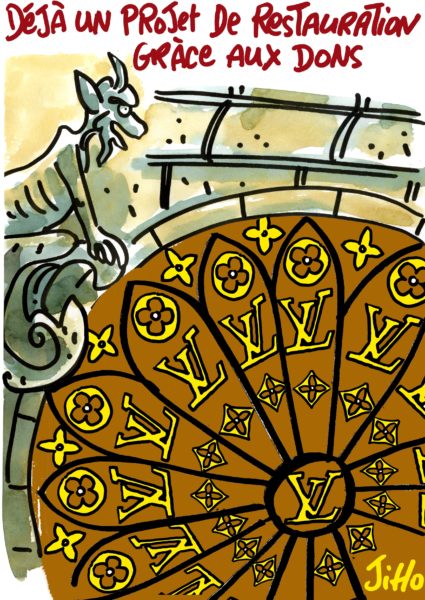 Tuesday, April 16th, 2019: the date of the fire that partially burned the cathedral of Notre-Dame in Paris. Notre-Dame was built between 1163 and 1345 next to the Seine, in the French capital. One of the most important symbols of the Catholic Church, it is a major French monument and has been a UNESCO World Heritage Site since 1991.

Just a few hours after the fire started, donations from families, companies and individuals started being received in order to restore the monument. The luxury group Kering and the Pinault family donated €100 million. It was followed by a donation of €200 million from Bernard Arnault, the world's fourth richest man, and his LVMH company. The Bettencourt family and its L’Oréal cosmetics firm chipped in €200 million. Oil giant Total gave €100 million and advertising firm JC Decaux put up €20 million. Business concerns including French banks (BNP, Société Générale, Crédit Agricole, BPCE), insurer Axa, and the pharmaceutical firm Sanofi have made pledges totalling tens of millions. La Française des Jeux, the national lottery company, is allocating its share of the proceeds from Saturday’s Easter lotto. The City of Paris (€50 million) leads the flurry of donations from assorted levels of government across the country. In Hungary, the city of Szeged, population 160,000, said it would donate €10,000 in gratitude for a donation from the City of Paris after a flood devastated the city south of Budapest killing 160 people in 1879. The International Olympic Committee said it would give €500,000 to boost the chances of meeting French President Emmanuel Macron’s five-year rebuilding goal, with Paris slated to host the summer Games in five years’ time. “The objective of completing this reconstruction in time for Paris 2024 will be extra motivation for us all,” IOC President Thomas Bach wrote in a letter to the organizers. Donors had, by Thursday, pledged €850 million to rebuild the 856-year-old heritage site.

March 14th, 2019: cyclone Idai caused the death of more than 1000 citizens and 2 million casualties in Mozambique and Zimbabwe. The UN donated €250 million to help these two countries.

January 25th, 2019, a dam collapsed at an iron ore mine in Brazil, resulting in the death of more than 10 workers and nearly 300 people missing. Little money was was donated.

Indonesia, Madagascar, Haiti and Cuba, among others, have suffered catastrophes, sometimes even worse than that caused by Idai, and never have any of them received as much money as was donated for the reconstruction of Notre-Dame…

It is wonderful to see how people are mobilizing in order to help and support the French rebuild an important building, but it is shameful to see what humanity’s priorities are… Disasters in poor countries do not get so much media attention. Disasters make the poverty and inequality there even worse. The aid going to disaster areas is totally inadequate (though the UN’s first Sustainable Development Goal is: “NO POVERTY”).

The firemen said things could have been worse: no lives were lost, no injured, and more than half of the cathedral was saved. Almost a billion euros has so far been collected to restore the structure; how many lives could have been saved if the same people had donated the same amount to fund teams of aid workers and  doctors, and to (re)build vital infrastructure in disaster zones?

Warm welcome to the new members (all in Seconde)!

Presentation of the “CV citoyen” by Anne-Sophie

Minutes of the meeting held on Friday 5th April 2019

Minutes of the meeting held on Friday 22 March 2019

Internal Organization
Mr Périchon must not be disturbed (he is extremely busy)! Only PN goes to see him on behalf of the MUC (unless PN says it is ok for someone from the MUC to go and see him directly concerning a particular matter).
Only actions approved by the executive committee can be undertaken.
Only information approved by the executive committee must be put on social networks or on the noticeboard (it is very important that all information be clear, without spelling or grammar mistakes, and sent out on time).
Only the Presidents can speak on behalf of the MUC (they represent the MUC). The Presidents can give permission to a member to speak on behalf of the MUC on particular occasions.
The MINUTES must be published (and displayed on the MUC noticeboard) within five days of a meeting.
The AGENDA must be sent to all members at least 24 hours before a meeting (it should also be displayed on the noticeboard).
After each meeting, everyone must make sure the secretaries have understood everything that was said, noted all the decisions taken, and listed who has to do what for when.
The person presiding the meeting (not necessarily one of the Presidents!) has to make sure everyone gets to speaks during a meeting.
If you want to speak, please ask the person presiding. Please do not speak all at once or start a separate conversation!
The executive committee (presidents, treasurer, secretaries, VP in charge of communication) need to write their own “job descriptions” for next week’s meeting.
The AGENDA has to be written by the presidents after they have read the MINUTES of the previous meeting (then they send it to PN to be published on the BLOG).
The MINUTES have to be written by the secretaries then checked by the presidents and then sent to PN (who will publish them on the BLOG) two days at the latest before the next meeting.
Garance will explain at the next meeting how the (older!) members of the MUC can communicate efficiently amongst each other between meetings.
Garance will ensure that all relevant information (approved by the executive committee) is relayed on Instagram, the noticeboard, etc. (NB: only social networks approved by M. Périchon can be used!). At the next meeting, Garance will present her ideas on how to improve our internal and external communication.

PN says Mr Périchon said the Salle des fêtes will (hopefully) be equipped on time with high quality sound and lighting equipment.
Salle F30 will be turned into a video recording studio (maybe by 10th May so that the candidates can record their speeches for Youtube).
Titouan is responsible for the scenography, the lighting and the sound systems (with M. Choco) for the competition.
Team Massillon: a native speaker will be helping Mme Carion (the “référent” teacher of the SO19 at Massillon)
Ombeline will send a message to Charlotte Legrand (Jury president) to organize a meeting asap of the Jury members
Garance will (next week) take a picture of the SO19 organizing team (for the SO19 blog) and of the Massillon Team (because they are lovely).

Mr Périchon has kindly offered to make F30 the MUC office and meeting room (yeah!). The recording studio equipment will be under lock and key. We may have to share with a theatre group. The number of people allowed in the room is limited to  25 (PN has to check the exact number with M. de Féligonde). The room will be cleared out asap. We have to take our meeting table up there, decorate the room (“happy” photos, cartoons, etc.) and get the coffee machine working!

Garance has to find a website from which we can buy “ethically made” baseball caps. We have 80 € on the MUC account to finance the purchase of the baseball caps.

Mr Périchon has allowed the MUC members (only!) to travel to Lyon on the 5th and 6th of June. Thiago is in charge (with the help of PN and JP) of the trip (transport, accommodation, food, visits, budget).
We have to organize a (Brazilian?) pancake sale to finance the trip (Thiago is in charge).
We will organize a trip to Strasbourg and/or Brussels at the beginning of the next school year  maybe with the Jeunes Européens. A trip to UNESCO headquarters in Paris is probable too in November.

Ideas to save the planet

Victoria thinks we should urge restaurants and cafés to stop using plastic straws and to use recycling bins.
JP says there should be recycling bins in classrooms, the “foyer”, etc. of Massillon.
There should be a vegetarian lunch at least once a week.
A lecture series on environmental issues would be good.
Pierre Nettleship (who is an engineer in Ecology who works for the State) will give a lecture on climate action; Mr Périchon will confirm the date soon (probably on the 3rd of May).
PN suggested that, because of the large number of “green” projects, the MUC should set up a separate “Massillon climate action group”; all the members are keen to join! If Mr Périchon gives his permission, we will set up the group and  invite pupils and teachers and staff to join.
Amalia thinks a week of cultural activities (with conferences) would be good (celebration of cultural diversity at Massillon).

The MUC has been asked by the CIED to help organize and take part in a “European dialogue” on  Saturday 6th of April. PN explains that this will be difficult because the Premières are already at Massillon on Saturday morning… PN will contact the CIED to ask if they need our help Saturday afternoon.

Village européen on 9th of May

We cannot take part because the Première are at a conference all day. PN will inform the CIED.

Edouard Engels volunteered to lead the discussion. We are all very happy about that and thanked him. Edouard will discuss the topic and the date of the Café with Loriane and JP.

JP will contact Mr Périchon to ask if and when this will take place. Please send
ortisbateau@gmail.com
your poem
to be published
on this blog!
😊

My name is Léa, I’m 17 years old and I occasionally write poems. I think my poetry is "authentic" because it's about my feelings; sometimes my poems can deal with happiness and sometimes they express sadness or even anger. It’s really important for me to explore all the aspects of (my) life...